Superior canal dehiscence syndrome consists of any combination of hearing and balance symptoms which are caused by an extra opening in the inner ear which happens at the top of the superior semicircular canal.  The superior semicircular canal is one of the three balance canals.  It is normally does not have any openings but it does arch high and close to the undersurface of the temporal lobe of the brain.

HOW DOES THE DEHISCENCE FORM?

When we are born, only 1/10th of a millimeter of bone separates the semicircular canal from the dura overlying the temporal lobe of the brain and usually this thickens to 1mm of bone thickness by age 3.  In 1-2% of individuals, this bone does not seem to thicken and, in fact, even becomes thinner with age.  The cellophane-thin layer of bone may finally break or dissolve, creating an extra opening in the inner ear. 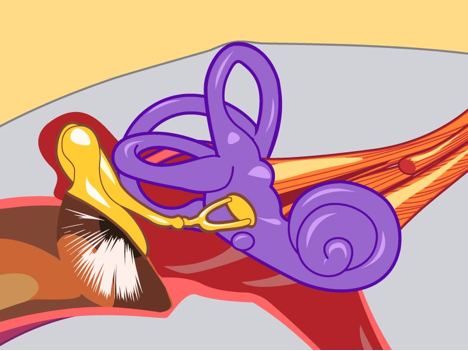 This patient has potential to become symptomatic if the cellophane–thin layer of bone over the superior canal dissolved or ruptures.

WHO GETS SUPERIOR CANAL DEHISCENCE SYNDROME?

Only patients with a potential dehiscence as described above can become symptomatic. Symptoms may appear gradually over time or suddenly with trauma to the ear from impact, loud sound or pressure change.There is a tendency for symptoms to increase in intensity over time after they initially present.  This progression may continue for 10-15 years before symptoms become severe enough for a patient to seek medical attention.  In my patients one in three reported a history of some trauma associated with the initial onset of symptoms.  It was slightly more common in females, slightly more common in the right ear, but can also occur in both ears.  The symptoms seems to develop in mid-life.  The youngest patient identified was 29 and the oldest was 82 years of age, with an average age of 50. 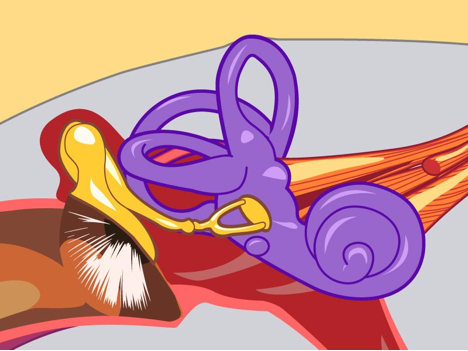 There is no bone separating the fluids of the inner ear from the cranial cavity. This can cause symptoms associated with superior canal dehiscence syndrome.

WHAT ARE THE SYMPTOMS OF SUPERIOR CANAL DEHISCENCE?

Sounds traveling by unusual routes through the inner ear can disturb the delicate balance organ and cause dizziness in some patients.  This is called the Tullio’s phenomenon, or dizziness caused by loud sounds.  In other patients, the sound entering the inner ear escapes through the hole, before it is detected by the hair cells of hearing resulting in a hearing loss which mimics the conductive hearing loss of the middle ear commonly caused by middle ear fluid or excessive stiffness of the hearing bones.  Many patient’s who have developed an extra opening in the inner ear  can also hear unusual sounds from their own bodies. This is because sound travels through the fluid and bone of their bodies and into the inner ear through the opening in a way that was not possible before.  Some patients can hear their eyes move, others their own voices loudly reverberating in their ears.  Many hear their bones creak, their heartbeat, and drawing their fingers down a hair or over the ear sounds as though they are moving their finger over the top of a microphone which is turned on. One of my patients is a mechanic who has the uncanny ability to find the source of trouble in an engine by listening with a screwdriver touched to different parts of the engine.

The videos below illustrate the mechanisms of both normal sound transmission in the inner ear and the abnormal pathways associated with sound generated symptoms in patients with superior semicircular canal dehiscence.

Sound pressure normally enters at the oval window and is released at the round window. Between the two windows is the proximal end of the basilar membrane.

Symptoms from the extra opening may also be caused by abnormal movement of inner ear fluid in the labyrinth. These patients may get dizzy when they cough or lift heavy objects because the increased pressure in their head(Valsalva) pushes on the fluids through the dehiscence and moves the tiny balance organs. Patients may also get dizzy when popping their ears or when the pressure in the ear canal is changed.

A dehiscence at the apex of the superior canal may render the labyrinth vulnerable to fluid displacements from changes in intracranial pressure. Valsalva will cause a tonic inhibition of superior ampulla tone. Release of Valsalva will cause a momentary exitation of superior canal output. Because excitatory stimuli of the ampulla have greater magnitude than inhibitory stimuli patients are generally more symptomatic with release of Valsalva than during Valsalva.

HOW RARE IS SUPERIOR CANAL DEHISCENCE?

It is currently unclear what percent of persons with a dehiscence become symptomatic. At our clinic in Wilmington, Delaware, almost 45 symptomatic cases have been identified since April 2000.  My practice is restricted exclusively to the patients with problems of hearing and balance.  I have found that 1 in 200 new patients has ear complaints which are ultimately attributed to a functioning superior canal dehiscence.

HOW IS THE DIAGNOSIS MADE?

To identify these patients requires a high index of clinical awareness of the presenting signs, symptoms and typical history associated with superior Semicicular canal dehiscence. The diagnosis can be confirmed with high-resolution CT scan of the inner ear.  This scan has to be specially formatted to visualize the superior canal using parallel, perpendicular, and even radial views in some cases.  Additional confirmatory evidence of the presence of a dehiscence comes from a clinical test called a vestibular evoked myogenic potential.  This is a test which measures changes in the ability of sound to enter the inner ear, which are associated with the presence of the abnormal extra opening.  This test can be done in different ways so it is difficult to compare results from one study site to another.

Fortunately, most patients have mild enough symptoms that they do not require any form of treatment.  Treatment of superior canal dehiscence for patients who have sound intolerance would be using ear plugs in select environments or avoiding particularly irritating sound is adequate.  Most patients are reassured by a knowledge of their diagnosis. Knowing what is causing symptoms, tends to improve symptom tolerance because ongoing worry that the symptoms could be caused by a dangerous problem is eliminated.  Additionally, an accurate diagnosis may protect the patient from unnecessary or potentially harmful treatments used to see if symptoms will improve. Patients who have migraine uniformly benefit from migraine treatment as their symptom intensity and tolerance seem to go down once migraine is treated. It is possible that having migraine increases the chances that the symptoms from a dehiscence will become bothersome since migraine causes sensitivity to any sensory stimulus. In my series an unusual number of patients had migraine and were treated primarily with migraine therapy.

Although surgical treatment is available for superior canal dehiscence, surgical treatment can be considered in a state of evolution since this entity was only first reported in 1998.  The surgical community is still looking for the most reliable and safe method for repair of superior canal dehiscence.  This is the reason that surgery is offered only to the most severely affected patients.

The traditional surgical approach involves a middle fossa craniotomy, which means to remove the bone from over the temporal lobe above the ear and then to lift the temporal bone to find the dehiscence which is then theoretically covered with bone or soft tissue.  This essentially results in a plugging of the canal but can effectively resolve symptoms.  This approach has been used successfully and safely by experienced surgeons but is not as easy at it sounds and should be undertaken with some caution by unexperienced surgeons.

A craniotomy is made in the side of the head above the ear. The temporal lobe is lifted and the tiny canal opening is identified, resurfaced or plugged using various materials such as soft tissue, bone, tissue glue or surgical cement.

Experiments have also been made with transmastoid occlusion of the superior canal, both proximal and distal to the dehiscence.  This avoids the need for a craniotomy and has been done safely in our clinic since 2001.  More recently, we have successfully treated superior canal dehiscence using a transmastoid microcraniotomy approach.  This involves a mastoidectomy with an incision behind the ear and then a tiny opening under the temporal lobe just behind the superior canal.  It is though this 3millimeter x 5millimeter opening that the canal can be treated with all of the advantages of the larger craniotomy.  Although surgical experience is early with this novel approach, it seems to be very well tolerated and can be performed as an out-patient.  This is a significant advantage over the middle fossa craniotomy, which requires a longer procedure, carries more direct neurosurgical risks and requires a longer hospital stay, including ICU post-surgical observation. I have successfully used transmastoid approaches to treat symptomatic patients since 2001. 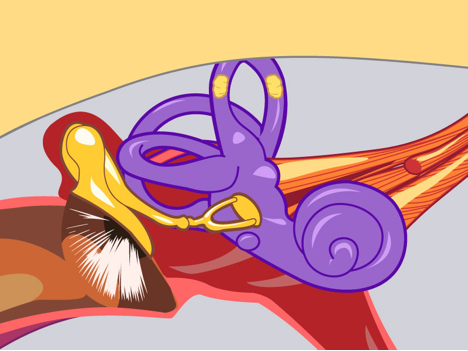 Transmastoid plugging of the superior canal

This approach uses a standard mastoid approach with an incision behind the ear. The superior canal is identified and plugged with wax or soft tissue to isolate the dehiscence. The Transmastoid Microcraniotmy repair is a variation of this approach that makes a tiny opening in the cranial cavity behind the superior canal to allow tissue or bone to be inserted over the dehiscence from below. 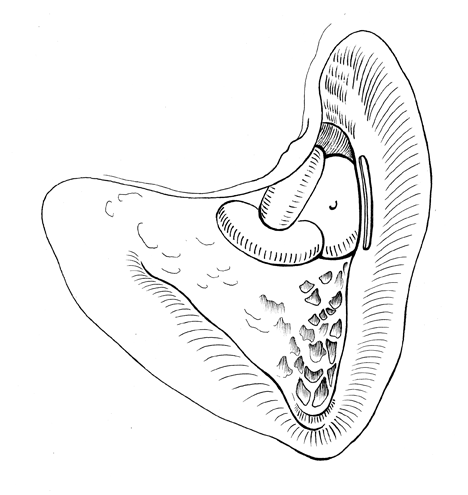 Transmastoid Microcraniotomy Repair of Superior Canal Dehiscence: After a traditional mastiodectomy is performed a small area of the dura posterior to the dehiscent superior canal is exposed. 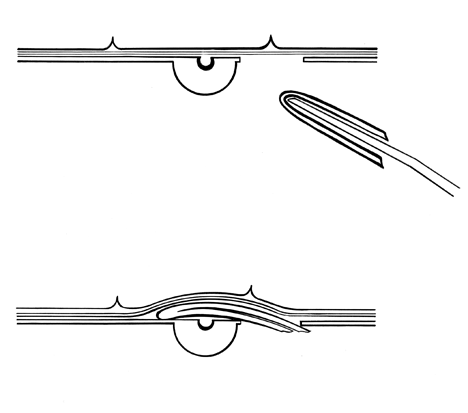