Glomus tumor are typically benign but highly vascular tumors which arise in association with nerves which exit a very difficult anatomic area beneath the ear. Associated with tiny nerves which exit the skull adjacent to the carotid artery and internal jugular vein are tiny groups of cells called paraganglia. These cells have a special function of sensing gases in the bloodstream at the carotid bifurcation in the neck. These cells descend to the carotid artery along nerve branches as we are formed. Some of these cells can be left behind on the nerve which courses through the middle ear behind the eardrum and others may remain at the base of the skull in the jugular foramen, which is the name of the exit of the internal jugular vein from the skull. Most paraganglia ride along branches of the nerves down through the neck to the bifurcation of the carotid artery. If these nests of paraganglia begin to replicate abnormally, a glomus tumor results. A glomus tumor may also be called a paraganglioma.

Glomus tumors are classified into types depending on where they begin to grow. They are typically benign and are treated by surgical removal. Glomus tumors affect females more often than males, and most patients are in their 40’s or 50’s at the time of presentation to the doctor.

Most patients with glomus tumors will present to the physician because the ear is blocked or because they hear a pulsing sound in the ear caused by the blood flow through the tumor or the pulsations of the tumor against the eardrum. A few patients may present with hoarseness, which is more common in tumors arising lower in the neck. If you are confirmed to have a glomus tumor, you will be asked about your family history, because some families may have several members with glomus tumors.

Planning for surgical excision of a glomus tumor may be straightforward or complicated. Usually, you will be asked to have a CT scan of the base of the skull to carefully define the size and shape of the tumor. An MRI and MRA exam is also very useful. Standard hearing testing can help determine if the inner ear is directly involved. A careful neurologic exam will be performed of the nerves involving the head and neck.

If you have a medium and large glomus tumor, you will be asked to submit blood and urine tests to detect hormones which can be produced in up to 3% of tumors. It is important to detect these hormones before surgical removal because the hormones can spill from the tumor during surgical removal and cause the blood pressure to rise to dangerous levels. If you are determined to have a tumor which produces these hormones, you will be given medications to protect you from the effects of spilled hormones during surgery.

If the studies confirm that your tumor is very small and limited to the space behind the eardrum, the tumor is classified as a glomus tympanicum. These tumors are easily removed by lifting the eardrum through the ear canal or by making an incision behind the ear. In some of these tumors some removal of bone around the ear and mastoid is required to provide exposure for safe removal. This type of tumor is called a glomus hypotympanicum. Surgery for glomus tympanicum and hypotympanicum tumors can generally be done safely as an outpatient. 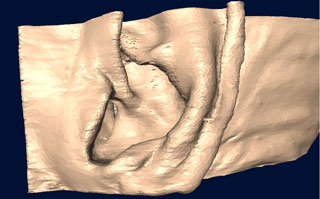 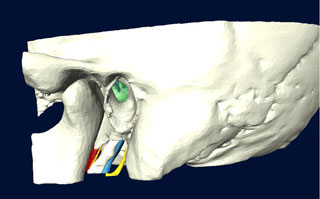 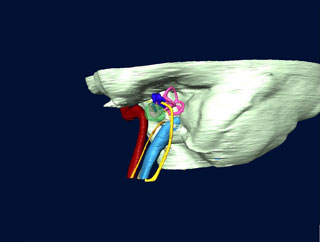 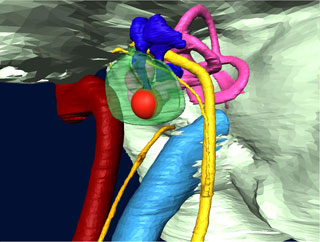 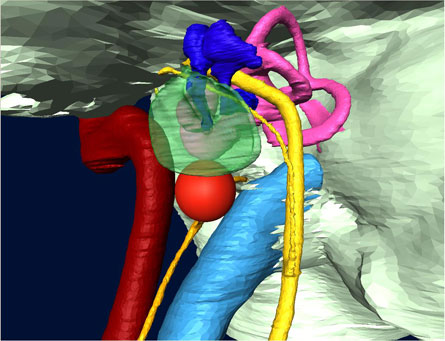 If the tumor extends from the ear down into the internal jugular vein in the jugular foramen, preparations must be made for a larger type of surgical procedure to remove the tumor completely. Tumors in this location are referred to as glomus jugulare and tend to be larger at the time of diagnosis than other types of glomus tumors. This is because they do not cause a noticeable lump, problems with nerves, or ear blockage and pulsations until they are large. These tumors may have extensive invasion into the bony spaces in the base of the skull, as well as into the upper neck and into the intracranial space. The nerves exiting the skull through the jugular foramen are often adherent to the outer surface of this very vascular tumor. These nerves control the sensation and muscles of the tongue, the throat, the vocal cords, and the shoulder, and are at risk for injury during surgery. State of the art intraoperative nerve monitoring techniques are utilized to minimize nerve trauma during tumor removal.

Despite careful nerve monitoring, approximately half of patients who have tumors in the jugular foramen completely removed will have nerve deficits after surgery which did not exist before surgery. These deficits can result in difficulty swallowing, weakness of the voice, and weak cough. These problems are severe enough that subtotal tumor removal is often recommended. A small area of residual tumor can be left on the nerves and treated with focused radiation.

Temporary facial weakness is the most common side effect in the removal of these tumors because the facial nerve often has to be moved out of its normal position to allow direct access to the jugular foramen. This is especially true in cases in which the tumor is also eroding the bone around the carotid artery.

Removing tumors which grow in the internal jugular vein and extend into the base of the skull involves opening the vein with significant blood loss during tumor removal. Blood transfusion is often necessary. With several months planning, a patient may donate several units of his/her own blood for retransfusion during surgery.

The final preparation for removal of larger glomus jugulare tumors is arteriography. This procedure is typically performed a day before surgery and is performed by a neuroradiologist. Catheters are fed into the tumor area from a puncture site in the groin, just as is done for cardiac catheterization. Arteries going to the tumor can be blocked by small particles placed by the radiologist through the catheter. This decreases the bleeding during tumor removal and can aid in the preservation of the nerves of the jugular foramen. This is called embolization.

Surgery for glomus jugulare tumors may take many hours and a hospital stay of 3-4 days is generally expected. 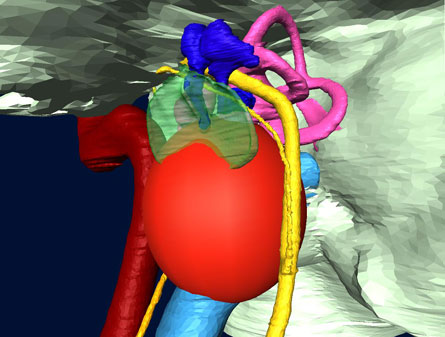 Glomus tumors which occur lower in the neck typically arise along a nerve called the vagus nerve, and are known as glomus vagale. These tumors usually are noticed because of a change in the voice caused by injury to the vagus nerve which controls the vocal cord on the side of the tumor. Some patients with glomus vagale tumors present with neck pain.

Surgery for a glomus vagale tumor is generally done through an incision high in the neck. A secondary procedure to rehabilitate the paralyzed vocal cord is often necessary. 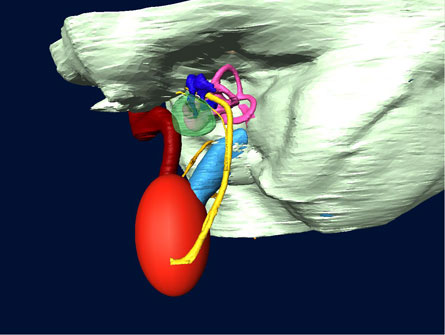 Glomus tumors which occur lower in the neck typically arise along a nerve called the vagus nerve, and are known as glomus vagale. These tumors usually are noticed because of a change in the voice caused by injury to the vagus nerve which controls the vocal cord on the side of the tumor. Some patients with glomus vagale tumors present with neck pain.

Surgery for a glomus vagale tumor is generally done through an incision high in the neck. A secondary procedure to rehabilitate the paralyzed vocal cord is often necessary.

Radiation therapy has been performed as a treatment for glomus jugulare tumors because surgery is long and can frequently result in numerous cranial nerve injuries. Although tumor growth can be stopped by radiation, symptoms such as pulsing in the ear are usually not. If surgery becomes necessary because of growth after radiation, surgery can be very difficult because of scarring caused by the radiation therapy and the ability to preserve nerves is diminished. In my practice, radiation therapy has been reserved to control tumor growth in elderly individuals or in those so medically compromised that they cannot tolerate surgery for tumor removal. In some cases where surgery is performed, a small area of tumor will be left over nerves and treated with focused radiation to preserve nerve function. 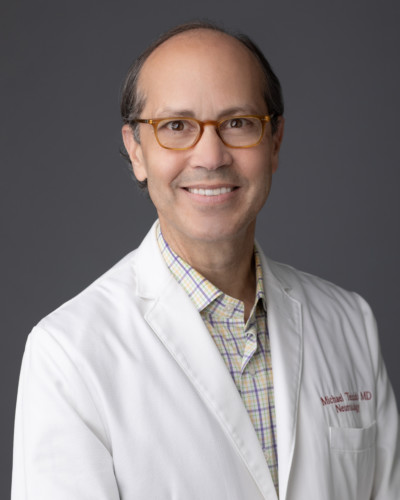